It is time for a new topic, Graciousness, for Week 21.  Curiosity was a bit of an odd topic, a definite challenge and perhaps deserving more exploration after my 52 weeks are complete, so join me for that, if it was also challenging for you. 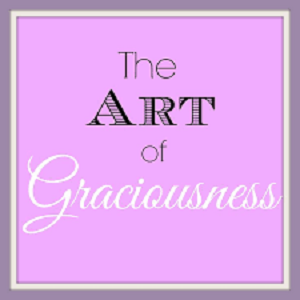 Graciousness came about as a topic when Humility just would not do! Let me explain….

During my growing years, I believed being humble to be spiritually worthy of attaining, earning a ‘kingdom of heaven’ kind of reward should I be able to achieve an accurate amount of the stuff.  Then, throughout my twisted first marriage, I was tortured with the concept of humility like it was a weapon to be used cruelly whenever my opinions did not match those of my spouse.  There was no such thing as a simple difference in thought. Instead, I was condemned for not always having a humble spirit toward my husband and boss, the person God himself gave His personal veto power to, and the one I must humbly submit to in all things….or so he thought and behaved.

I was conditioned not to disagree with him outwardly, and most times kept my mouth shut, feigning the humility required to keep danger at bay.  And then there were times I could not keep it contained, I had to voice my position, the fear of saying something oppositional outweighed by a greater need to express a deeply, personal view. There was never a benefit to this kind of expression, no intimacy or understanding gained.  Only perpetual mocking or scorn…and one more example of evil workings from my cold heart.  My thoughts were no longer relevant to me.  I ceased having my own opinions, deferring to his, in conversations and in my mind, in order to decrease chaotic episodes, internally and externally.

This ‘survivor’ approach made me feel like I was handling it….like I was managing him.  Habitually, I convinced people who discovered our dysfunction, of how virtuous his motives were, in straightening out my haughty, flawed ego.  I defended his refusal to let me wear makeup, to adorn myself with jewellery, to be seen alone in public places where lustful eyes might glance upon my beauty and cause me further sins of increased vanity and pride….this was how humility became a major trigger in my life….BUT also brought about one of the few times I stood up to his nonsense and took matters into my own hands….literally! 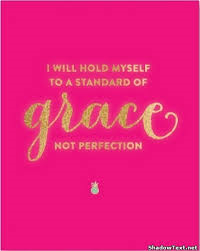 Almost a year after the birth of my third baby, my hair was a mess.  Also refused haircuts, I had not had a trim for over a year.  Hormonal surges during pregnancy had made some patches thick and long, but once the hormones had stopped pumping through my cells, my hair started to fall out in other places.  The result?  A big, hot mess of stringy, half-way down my back, uneven hair.

It reminded me of the matted lumps we once cut off our beloved farm dog, Grover, after a particularly rambunctious summer of trouncing through our back woods and underbrush.  It was impossible to get it even or straight, due to large, clinging clumps of fur and thistle twigs.  He self-consciously walked away from his trim, tail between his legs, probably feeling naked from the loss of chunks of fur….but got over his unflattering mane quite quickly….not me.  I did not get over it.

In fact, it bothered me so much, I did a crazy thing.  I asked my ‘husbandboss’ for money to get a haircut.  That was real desperation, making such a controversial request, with no reasonable expectation of success AND a likelihood of conflict ensuing.  He scoffed, told me my hair was fine and that humble Christian women do not need haircuts.  They go natural, just as God intended.

So my natural, ratty hair would continue to match the other unkempt, fuzzy areas of my body that were prohibited from being touched by any kind of blade. My legs were so furry, that my own kids would stare, not being able to tell where my leg started and my fur-lined slipper ended.  I think my oldest boy called me ‘wolf legs’ one time…. And that is only horrifying if you did not notice the condition of my armpits, which were a jungle all to their own and also a natural, Godly part of my body, not allowed to be unrighteously shaved.

This was a far cry from the girl mum raised me to be.  Mum had great style….had flare….she took care of herself.  Filing her nails, dressing for success, and always….ALWAYS sporting a perfect haircut!

What a fright my hair would be to her in that condition.  She was so passionate about hair that she enrolled me in a course that educated young ladies on how to care for their bodies with remedies you could make at home.  I chose some saved documents from that course as my icon this week.  (If you want the wholes recipes, I can copy them to a blog page) 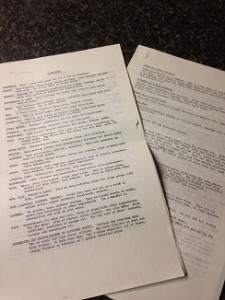 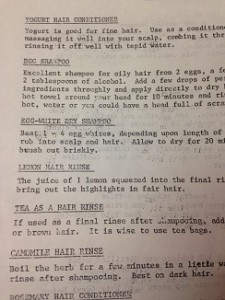 She never skimped on quality when it came to her style.  Mum was a truly classy lady, and she tried to help me find my style, too, but I was hopelessly lost in blue jeans and high tops.  No matter how many varieties of plaid she bought for me, I could not see past my Levi’s and Nike’s.

I stopped wearing jeans after getting married, they apparently did not fit into a ‘true’ humility category.  Oversized, hand-me-down sweatpants from ‘the boss’ was about as stylish as I could get without causing an unpleasant scene.  Sloppy clothes, slagging hair, shaggy body, it is no wonder I was bothered.  Mum must have been stirring in her grave for me!

It was to be a cheap, no frills haircut….not some fancy salon affair.

I was not asking for much, but since I wanted it…..the answer would certainly be ‘NO’.

I was angry…..seething inside.   I put third baby down for a nap, took the older two into their bathroom and filled up the tub.  While two toddlers happily played with bubbles and sponges, I took clippers in hand, reached for a handful of nasty, wiry hair, and shaved a strip as close to my head as blades would go, right down the centre of my skull.  No going back after that, so I kept stripping away at it, until my ‘hot mess’ hair filled a bread bag, and my head was bald, bald, bald.

Triumphantly, I marched into husbands office, plunked the bag of hair onto his desk, and muttered something about not needing the $12 anymore.  He reacted in horror, almost not able to breathe from shock.  Was he more stunned that I had been so defiant, or how ugly I was without hair?  Regardless, I turned my back when he questioned my sanity, left the room, and went to have a shower, and bawled, bawled, bawled.

Living without a crown of hair on my head was a most humble period of time. Not only because of judgmental stares from strangers, but also because an unworthy, unknown image reflected back to me in the mirror.  Who had I become?

I already knew by this point that I needed to escape the madness of my marriage, but I was stuck without means, stuck by loyalty to vows, stuck by his spiritual propaganda, holding me slave to this husband-master, as if my soul depended on it. 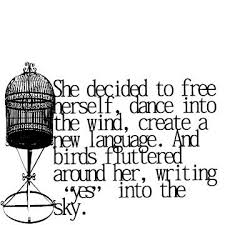 So now it makes sense, why I could not choose humility as a topic, even though I see the value of practicing it.  I learned more than enough about the ‘shoulds’ and ‘shoudn’ts’ of humility during my first marriage, to almost choke it out of existence for me…..until I realized something stronger was possibly growing.  When I chuckled through rough patches, it grew.  When I stopped taking myself so seriously, it blossomed.  When I chose to be less affected by others incidental hurtful actions, it released seeds.  And when I truly meant it when I said to people, there is nothing to forgive, it multiplied into a full garden.  I had stumbled upon Graciousness.

Not a Grace Kelly kind of etiquette, like mum would have loved to see blossom in her tomboy daughter. It is something more.

For me, Graciousness transcends courtesy and elegance.  It is a generosity of the heart that cannot control its giving, because it recognizes how generously it has been given to, and therefore, simply must share.  To do otherwise would be ingratitude….dishonour….missing the point altogether, and I do not want to miss it.

Hair, or no hair, may you find something for yourself this week, that leads you to a place of genuine grace, peace, and strength. 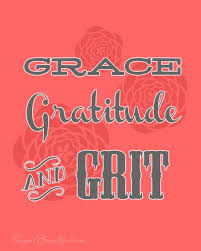 Previous Curiosity with US Next Grace Grows

3 replies to “Graciousness gets Gritty”