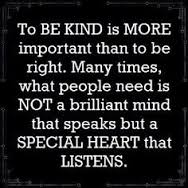 Another week has rolled along, full of peaks, valleys and plateaus.  The challenges were many, in this quest to be Kind to the ones closest to me.

What?? It was a challenge to be kind?

That sounds like I should be awarded a miserable wife/mom trophy….not a happy trophy….. but it is not like it sounds.  I was nice to everyone, but kind….I am not so sure.

NICE is easy!  I can do nice all day long, everyday, in my sleep, on the moon, for 14 years, blindfolded, with a 100 pound anchor dragging up behind me hurling insults at my backside, but KIND is….well, not easy.  So let’s get into it…..

My older son stayed estranged from me for over 8 years after the divorce, partially in an attempt to remain loyal to the twisted logic he had grown up with, but also because he wanted to continue to participate in a sport he loved, being coached by his father, whom he believed would be the only person to get him to the level he wanted to achieve.  It did not help that his father gave an ultimatum of rejecting him into the club, should he have regular ties or communication with me.

As a result, my son would initiate visits with his siblings about twice a month, which came with a ‘script’ he would recite to us, about how our lives were ruined, unrighteous, and we ought to return to the cruelty from which we fled, as our very souls depended on it.  Of course, these were not his exact words, but he did rattle off almost the exact phrases each time.

At first, I battled back in my defense, spewing the indignant wrongs of my 14 years of marriage.  This was not a successful approach.  He was driven further into his entrenched position, the more I defended.

Knowing I needed to find another approach, I tried to establish a boundary of ‘no-go’ topics.  We were not to talk about his father, the divorce, my personal life or how I should parent his siblings.  It broke my heart when I had to ask him to leave a few times, when he could not stay within that boundary.  When he got the hang of just enjoying his time with us…. playing games, running around the house, eating whatever he wanted, being as loud as he wanted…. he then did a fast-forward version of his script as he was putting on his shoes to go, still lecturing me over his shoulder as he took off sprinting down the hill, before I could respond.  I only realized this was an orchestrated pattern of behaviour, after a dramatic episode occurred.

He had been over visiting previously that day, and left one of his public library books with his little brother, a gesture of love to make his younger sibling happy.  He must have told his father this fact, and came frantically to my door a few hours later, where he forced his way past me and up the stairs with his shoes still on.  I tried to stop him, wanting to enforce another boundary put in place about respecting my house, and if shoes on the carpet would never fly at his fathers house, why should he think it okay at mine?

He, being a sweet and gentle boy all his life, fought off my embrace to stop him, started yelling as though he was in great distress, began crying out of frustration while he searched for the book, retrieved it, and fled out the door to a waiting vehicle driven by the man who was driving my son to  this madness.

It was then that my kindness approach began.  No more pressuring rules, arguments, boundaries, or expectations.  He needed kindness from me.  Nothing else would ever match the pressure he was feeling on the other side of his life.  So I listened to his rants, silently recited his script in my head while he delivered it faithfully, reframed his negative comments around his siblings and changed the subject as best I could to continue guiding where a healthy conversation could go….and I kept at that for 3 or 4 years…. 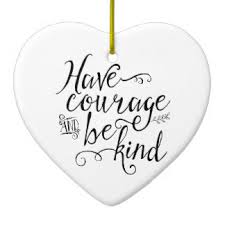 …..and he responded….with almost complete disconnect from us.  He had started University out of the country, which did not help the distance between us, but it was clear he had no intentions of continuing any kind of relationship with me, which also severed his relationship with his siblings.

2 years of silence ended on one particular Christmas break.  He came home to his father’s house, visited with his sister, and before she dropped him home, he agreed to come say hello to me.  He entered the house he swore he would never go into, and made polite conversation with me and new hubby.   He also accepted an invite to have a private tea with me.  We ended up talking for hours.

He was troubled because he did not feel like he knew me.  He wanted to hear about my childhood, any fun college days, what the beginning years of marriage with his father were like, and he looked at me through the same eyes as he did when he was young.  Gentle, curious eyes that sparkled as he talked about scientific theory for hours, which I had no hope of comprehending even when he was 7, but nevertheless, he would talk, and I would eagerly listen.

I am not exaggerating the hours we spent during his formative years in this mode.  Our homeschooling day never really ended, we would just continue the exploration of his little mind into the kitchen, or laundry room, or wherever I had to be next.  Those are sacred memories!  I rejoiced silently thinking I was finally getting my boy back….

Then his gaze shifted.  He looked at me with eyes more familiar to his fathers’, jaded and suspicious of every word I spoke.

This was not an attempt to reconcile.  It was an explanation of why he could not have me in his life.  His father was still making him choose.

My heart dropped to the floor in disappointment.  Instead of coming closer together, he was telling me I would not be invited to his graduation, wedding, or any other significant moment in his life, out of respect for his father.

I looked into his conflicted eyes and softly said,  I understand.  In fact, more than that, I agree!

No one should take away any happiness from him on any of his celebratory days, and I loved him too much to ever put him in a position to choose between having his father or his mother attend.

I did not hear from him for another 2 years….

But yesterday, I booked my hotel and flight to attend his University Graduation in May!

AH-HA!  Was it my kindness that took hold of him finally?  Maybe maturity strengthened him to not be manipulated any longer….or both.  But whatever lead him to ultimately decide I could and should be part of his life again, it may not have happened if my kindness came and went on a whim or was isolated to a singular incident.

Choosing kindness came about through many years of getting it wrong, fighting on the same hill over and over, feeling hopeless while trying to find more hope,  and desperately seeking remedies to a heartbreak that was not healing, not dulling, not ending.  Perhaps it was these battles that made me strong enough to try kindness.

This week, I held a mirror to the face of my heart and it imaged back to me a girl who ‘fakes it’ for a crowd, a woman who can pretend she is empathetic, a mum who can disguise her selfish desires, a wife who can avoid uncomfortable feelings, and I think I need to:  Do. Better.

Like I said last week, kindness is not for wimps, and it has kicked my butt up and down the merry block this week.

But you know what?  I am not giving up.

I believe one day I will reach the deepest layer I need, to truly feel, think, see, talk, and breathe kindness.

Knowing it will be hard work does not frighten me.  It affirms to me whether I am faking it or making it.  I hope it gets easier, like any muscle once you start to using it in a vigorous way.  For now, I will continue to be nice on the outside, while working full-speed inside, to be in the best ‘heart-shape’ possible.

I want my heart to bleed kindness. 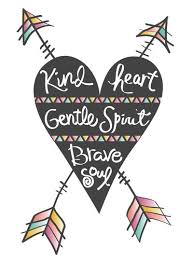 Previous Week 14, Kindness With YOU Next Week 15 and the Family Spoon

9 replies to “Kindness With YOU”