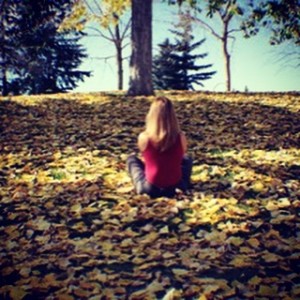 I did sooooo many bad things this week….at least that is how the commentary in my head has sounded too many times during this intimately focused week of patience….but let me back up…..I was not sure at the beginning of the week, if I had much work to do in the area of being patient with myself. I self-describe as being fairly open to labeling what attitudes are harsh to my esteem and believed my self-talk to be generally positive. I feared there wouldn’t be enough chances to adequately test my actions, as I was already quite advanced in what I thought to be a decent discipline of self-care. I was half prepared to invent stuff to be impatient about, but, as luck (life) would have it, there were plenty of moments to rehearse being patience with ME!

1st day run down: Woke in a panic over a clock alarm not set, sunny weather had turned gloomy, and moody teenagers were annoyingly glum. I forgot to take a photo of the beautiful turning autumn leaves on a vine growing outside our kitchen window, which is now ruined due to the cold and rain of a dismal morning. I also forgot to send my nephew his 10th birthday card, after promising when it would arrive.  I began adding it all up and the verdict was, I fail at almost everything. A swift boot of judgement kicked me hard and I thought “Can’t you do anything right?”…..and there it was. My work, laid out for me.

I realized quickly that my default for any ‘negative’ feelings within an experience, was judgement.   I was either trying to convince myself I was not supposed to be feeling this particular way, or I was too inferior of a human to feel any other way.  It was also easy to jump to the conclusion that someone else was to blame.  They had made me feel upset, and therefore THEY needed ‘work’.

I noticed the language I used internally.  When I am angry with something going wrong, I accuse myself in the ‘you’ tense, like there is another person inside who is responsible for failing, not the actual me.  I get mad at ‘her’ and hurl additional accusations from my old story.

By day 3, it had become too common of a pattern to ignore….trigger – upset – blame someone else – or blame myself – feel worse about the trigger – more triggers – REPEAT.  I realized the work was indeed mine.

Some of my real good HOT buttons got pushed during this week.  Teenagers alone are enough to threaten sending me to intensive therapy but lots of other challenges pushed their way into an opportunity to practice.  Some of the honourable mentions….moving furniture into different rooms within the house without a definite plan….a night of no sleep (see earlier comment about teens)….being hungry at a LONG school parent meeting, having skipped the previous meal, and not a single emergency granola bar to be found….PMS (need I say more)….a significant disagreement in parenting between me and hubby, nothing new, but very draining on the ‘happy-o-meter’….and on and on.  But what really took first prize for the biggest trigger of all, was facing the fact that I may have a hoarding problem, which is difficult to ignore when you move entire contents of particular rooms, into different rooms.  Even the message at church on Sunday addressed how we sacrifice joy in our lives from holding onto ‘stuff’.

AND I may have passed that trait down to my children, their space being stock piled with  treasures, just like their mama’s space. I was clearly getting a message to deal with this very personal issue.  My guilt was thick… heavy…. compounded by comparing my hoard to husbands minimal accumulation.  Guilt tried to choke out a faint voice, calling for release of my guilt, for letting go of my judgements, for transforming how I intersect with conflict.  A new pattern had to emerge.

So I would feel along the chain hanging from my neck until my fingers reached mum’s locket. Rubbing its smooth, slim surface, I kept asking myself to go farther than what was bothering me outside. I changed the tense in which I labelled myself: not ‘you’ anymore, I am ME.  This trigger is somehow about ME, for ME.  Then, as a bonus I added…it is OK to feel this way, even if you don’t know why you do.

That was a penny dropping moment. It Is OK to feel anyway I feel. I DO have reason to be bothered, but so what?  Is my goal to become more of a martyr/victim, like in my past?  Does having the other person feel bad about what I  perceive as offensive, make me feel better?   Can beating myself up with shame and bitterness find the patient behaviour I so desperately seek?  No.

So, just breathe a bit. Wait a bit. Allow love a chance to seep into this feeling.  And I felt better. I FEEL better.

When I was most successful in remembering my focus, staying aware of how each situation had a deeply rooted meaning I needed to find, calm ruled. Calm also carried over into following situations and into following days, building faster connections to the goal of patiently accepting ME where I was. But conflict also carried over. When I was least successful, not being able to gently guide myself into a place of internal reflection before responding to a trigger, a cloud of conflict would linger over my head until I could carefully accept that cloud as OK, breathing it away with loving reminders of why I started down this road.

Previous Week 1, Patience and the Locket Next Week 2, The Baby Bonnet and Patience with YOU