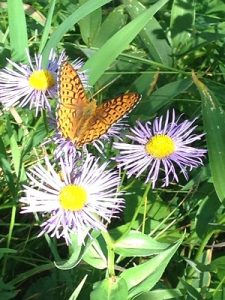 Thanks for joining me today. It is such a pleasure to know so many of you are bravely on this adventure with me, sharing your insights, confirming what is your truth and sending all your encouraging and complimentary words of love.  Thank you, from every part of my heart!

This week….my focus being Strength with US….I want to tell you a little story about a plant.  It is not an ordinary plant…actually, wait….it is ordinary. Totally ordinary.  So ordinary, there could not possibly be anything more ordinary.  It has ordinary needs.  Takes ordinary care.  It had a life before ending up in my hands, 24 years ago, so it has been ordinary for many years.  So why bother telling this ordinary plant story?  Let’s just say, Mum would like it.  And since I do not have an icon to use this week….Week 35….no item saved that would connect to her ‘green’ side….a story….about this common, plain, regular, average household plant….will have to do.

My mum surrounded herself with plants.  Before becoming a Municipal Administrator, she used her Bachelor of Science Degree in the Botany department for the local University.  She would often take me and my brother to her office, where she prepared petri dishes, tubes, fungi, spores and other strange looking roots inside odd shaped receptacles.  She wore a long, white lab coat, looking smart and focussed; her dark hair pulled back into a thick, low ponytail.  She sat in a heavy, metal framed, creaky chair on wheels.  It gained momentum quite easily when my brother and I pushed each other along smooth, polished industrial flooring, making for a noisy, fun ride.  Mum would allow a few back and forth passes of this regular occurrence, before sitting us down with something quiet to do while she finished her task.

I did not hear Mum speak much about life, but I did hear her explain, in depth, about plants.  What should be planted together, which perennials were hardy enough for our unpredictable winters, how to care for trees, when to trim, and when to transplant.  If only I had enough sense to apply those principles in my life….might have saved me from some big hurts and time on a Therapist couch! 🙃

We had plants throughout our house while I was growing up, in different locations according to their specific lighting needs. Only one plant would not perform to her approval, so she would often take this hanging fern back to the University Greenhouse, until it was on the mend, returning it home for another try, at keeping it healthy.  She did not give up.

But this is not the plant story I promised to tell.  This is my attempt to frame up how plants and growing things have been part of my historical experience.  But just because this is the case, does not make me an expert in the field.  In fact, I did not pick up any kind of green thumb-ism at all.  But….in order to honour her skill, I have tried to learn. 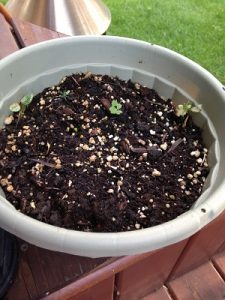 Nothing coming up here….

I have watered, sometimes. 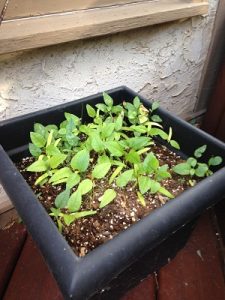 I have weeded and sprinkled sunny words of encouragement and nothing grows. 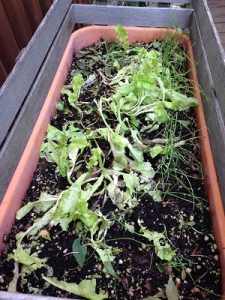 Almost had lettuce, and then….hail storms!

This year, the onions that failed last year volunteered and somehow there were fresh chives in May!  Pure fluke.  So, I am not gifted with anything green. 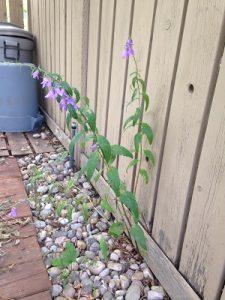 Mum’s early death prevented me from picking up lots of helpful tips….like….’how to not to marry a man who is not your best friend’.  Yes, she said that once, but I did not remember it until I was already well into my first marriage, wedding jitters and joy, long gone.  What remained were the few wedding presents that were unreturnable.  The ones that could fetch a cash refund, had already been returned, doing what I was told by a man who saw green in a different way.

Green, was for lining bank accounts, for which ALL had to be sacrificed to increase. Trips, a second car, restaurants, fun, long distance telephone calls, using the clothes dryer, everything was under scrutiny to pinch out another cent, another dollar. Had I not been visibly pregnant, store clerks may have been more reluctant to refund an item without receipt. Many did not ask questions, maybe my burning embarrassment was evident. It was a way for him to punish me.  For having people who cared to give gifts, for desiring nicer things, for getting pregnant while trying not to, for being a disappointing wife….I was always in the wrong, so, to make up for my failures….I did his bidding. Dirty work, if ever I did any.

One non-refundable present was a plant, inside a beautiful clay pot, which is where my story really begins.  It saw some bad days.  Drought.  War.  Famine.  Neglect.  There were days it did not look as though the plant would survive.  Without any green sense, this plant struggled under my care.  My ex would look scornfully at it, perhaps because he knew someone dear had given it, or perhaps because he disliked plants in general, but whatever his reasons, there was no love extended toward this plant.  Instead, he used it as a figurative litmus test on how our marriage was doing, villifying me as a ‘parasite’, who was unable to actually care for anything.  I think his exact words were, ‘If this plant survives, our marriage will survive’ but it was all up to me to make that happen.

He was not going to participate in maintenance.  He would not be part of sustaining its health.  He barked about how he knew better, saw better, cared better, and I was too dense to get to his level.  He persisted that anything, like the unsightly imperfection of this failing plant, should not be within his view.  Everything should be immaculate and pure….house, kids, yard, vehicle, and that was squarely on my shoulders.  How many times he sought me out, using more steps than it would have taken for him to get to a tap and water the !#$&! plant himself, to tell me the plant needed attention!

So why, when I had 1 hour to chose and remove my Mum’s antiques from that house of horrors….with a police escort to ensure the peace….under the pressure of knowing I would never again see anything left behind….why did I take this plant? 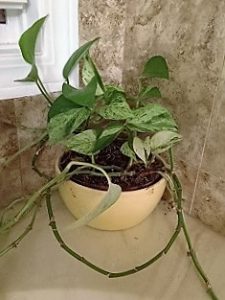 Because it reminded me of the beautiful lady who gave it?  Yes.

Because it was an innocent amongst a hostile feud?  Yes.

Because deep down….I knew….I had done everything I could to save it?  Yes.

Because even before I was able to comprehend it, I must have known, it was never my fault.  I was never supposed to take that responsibility alone.  Yes, I did not know how to help the plant thrive, but I did not give up. He let that plant struggle.  He watched it fade and go limp.  He withheld what would have saved it, based on short-sighted, ego-centric principals….and still, the plant lived.  Barely.  Because I kept it alive.  I sacrificed my dreams, my thoughts, my faith, my joy, my heart….to keep us all living….and that was killing me.

I did it for 14 years.  Stayed strong.  Held ferociously.

For proving we were okay

For the pet fish

For the innocent plant

This took STRENGTH. Lots and lots of strength.  Victims of domestic conflict are not weak.  They have an ability to believe harder, love fiercer, and trust greater in someone that could never match them. I think that is why they are drawn to each other.  One feels they can heal the other, and one wants to be healed, but each of them have no idea how. 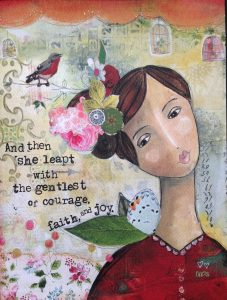 Strength kicks it up another notch when letting go of this toxic kind of life….leaving a person who would have everyone perish, rather than change his ways….was the hardest and best thing I have ever done!  Maybe I did learn from Mum after all….it was time for a transplant.

I may never be an amazing gardener, may never actually reclaim the flower beds in the yard that have turned to jungle, may never be a perfect caregiver of people either, but it does not matter. Family matters….time with them matters….living in and embracing the beautiful chaos, matters.  It is accepting flawed days with flawed people, who would happily go to the water tap when they see a wilting petal….

In these past few weeks, family emotional demands have been off the charts from their normal cycles.  What a difference it makes to share these burdens alongside a partner who can match my heart strides. It is the difference between letting go, and giving US another swing.

We gotta keep swinging together! 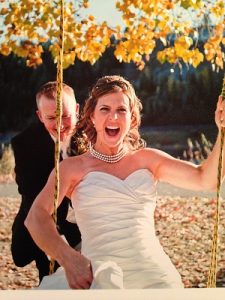 Previous Stronger Than Yesterday Next Strength for Today

One reply to “Strong Roots”