Week 6, Being Positive With YOU

Week 6 is upon us….so let’s get baking!  No, I have not decided to turn Finding 52 into a baking blog, but it would be a very close second on my ‘love-to-do’ list, judging from the amount of time I devote to stirring, mixing, measuring and testing whatever will fit into our toasty oven on a shiny sheet or pan. Not only does it remind me of times spent with mum, licking batter covered spatulas and wooden spoons while watching her bake, it also helps me remember a lesson I learned a few years after mum passed.  This is the story of ‘the’ cookbook: 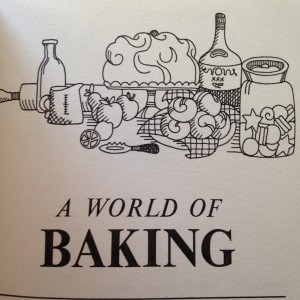 A year and a half into marriage and a baby in my arms, I was on employment benefits for a maternity leave, which meant money was not plentiful.  I had already been warned by former husband that if I did not find more work, another job, clock more hours while pregnant,  I would be responsible for any decrease in income and be the one figuring out how to pay our bills.  Not sure if this is common knowledge, but getting a job while you are pregnant, is difficult.  I was just starting a theatre career and work was not consistent, so I did what most actors do, supplemented my income by working at a restaurant.  Because people were allowed to smoke in public buildings in the early 90’s, I opted out of that job quickly, after learning I was expecting.  I searched out two part-time retail jobs, finished the show I was doing at a popular musical dinner theatre company, and hoped it would be enough to cover the expenses of taking care of my part of the finances and a baby.

There was NO extra money.  I forbid myself to eat any luxury items like cashews, spaghetti sauce, cheese, juice or milk, only buying enough so the ‘ex’ would have what he wanted.  I stopped buying toiletries and hair products, made things from scratch or not at all, and shopped at thrift stores for anything really necessary for me or baby.  This resulted in me looking like a scrawny, frizzy headed bag-lady, who ran frantically from store to store, newspaper flyers and coupon clippings waving in my hands, in search of the best price on weekly needed items.

Another factor contributing to my odd reality, was the inevitable discovery of a plethora of possessions I had been squirrelling away.  My Dad had remarried (which meant I no longer felt comfortable at home), he and new wife decided to relocate (which meant they wanted to downsize), and were auctioning off the contents of the house that raised me.  So, I moved into my ex’s little house and began filling up crannies and closets with stuff I was loading into my car from each trip I made to the farm.   I felt I needed to preserve these things…keep them safe….hoping to re-establish one day, a comfortable and stylish world like my mum had carefully built for us.

She had many, many cookbooks.  So when former husband looked into his usually bare cupboard for the singular cookbook he owned and saw a mountain of choices instead, he ordered them out of the house.  What, like store them in the garage?  Nope!  He wanted them gone, and as an obedient wife, I sadly boxed them up.  I tried to negotiate their merit, how interesting our meals would be with all these recipes to choose from, but to no avail.   I tried to plea for their sentimentality and charm, but my efforts fell on deaf ears.  I tried to hide them for a while, pretending they were on their way to the donation drop, but just did not have the time, being very busy with baby business and coupons…. so he offered to take them to our alley for the garbage collectors to haul away.  That, I could not accept, so I took a breath, closed the box and gave away what felt like my mum’s soul, onto a crowded, cold, cement dumping floor of a thrift store collection site.

You might be screaming at me right now, wondering why I would give up those precious things, and not fight to keep that special connection to my mum.

It was a trade off.  Cookbooks were not the only items on the chopping block for their removal or destruction.  I chose other meaningful items over the cookbooks, knowing I would not be able to convince him to keep everything.  After living through a series of moving to different houses accompanied by traumatic arguments, many important things were destroyed or dumped and I really could not bear those books to be tossed angrily into the garbage, so I freed them.  Theirs was not a happy goodbye, but at least it was not cruel.

I am thrilled to say there is a happy ending….but I am not going to give it away, just yet.  How this story ends and ties into this week’s focus of Being Positive with YOU, I think goes something like this….

Life surprises me.  People surprise me.  Cookbooks surprise me.  So I am looking forward to my surprises this week, as I focus on being positive with the closest and most endearing people in my inner circle. 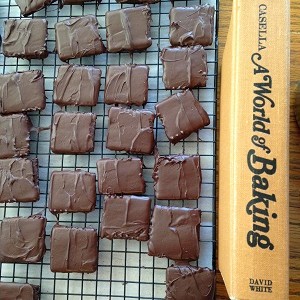 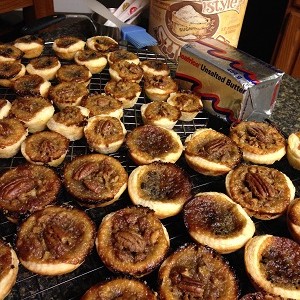 Chocolate Mint Cookies, Butter Tarts, and much more to come this week.

2 replies to “Week 6, Being Positive With YOU”