Week 7, Trophies for Everyone!

Well, I have to admit, I am still recovering from a bit of jetlag after last weeks ‘flight’.  As I completed Week 6, Being Positive With YOU and ‘the cookbook story’, it felt like I had launched from the earth into a stratosphere where wisdom and insight abound….only to tumble softly into the realization that all is temporary and what I knew yesterday, does not apply today or transfer to tomorrow, at least not completely.  There is always a spin or a twist that comes along that I do not expect, so I must keep applying the process in order to get to what feels like a good result.  So what does Week 7 have in store as I ponder how to be positive with US?  I am hoping jetlag wears off soon so I can get this brain in gear!

If you did not already guess what this weeks icon might be from the title, I will tell you now. 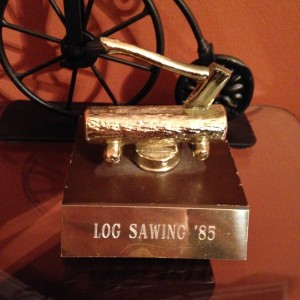 It is a trophy that my mum and I won together, for a log sawing competition….I’ll let that image sink in for a bit…yes, a log of a tree… getting sliced away with a two handled saw…and its a race.  This was considered entertainment during an annual festival celebrating the history and heritage of our friendly town of less than 1000 people. 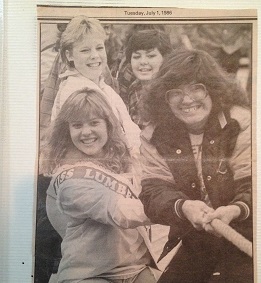 Ignore the sash I am wearing for a few weeks…

Looking back, it seems very implausible that my mum and I would ever compete in an event together.  I was a self appointed athletic expert, excelling at track and field, volleyball, badminton, softball, and my personal favorite, arm wrestling.  While her highest level of athleticism was attained by slipping down the curling rink ice, clenching a wobbly broom that seemed to be holding her upright.  I remember thinking I could never win if mum was my partner.  I did not know her as a farm girl doing chores and taking care of animals, but I did see her tend a very large garden, where she could hoe by hand like a machine.  I watched her and dad from a popular tree branch that often beckoned me to come sit upon its wide, strong branches, amongst rustling leaves, hiding from their hard working view, until I was spotted and given a task.

But this was different.  This was not farm work.  It was happening in town, in front of an audience, and others would be competing; the exact criteria I needed to have my competitive nature emerge and pounce into action. I had already been the first female to scurry up the 20 foot log pole and ring the dangling bell which waited for all who successfully navigated the ascent.  (Another tree log, but this time no saws or boosts up, just legs and arms wrapped tightly around a de-branched, de-barked, smooth vertical post, pounded into the ground in the middle of town)  After scaling the pole in glorious girl victory, I did not want to lose my momentum by losing the log sawing event.

Mum and I observed our fellow competitors eagerly, watching for clues and tips to use in our bid for a spot in the finals.  Crosscut saws are very bendy…. and sharp!  It takes a delicate balance of effort, then no effort, in order to effectively engage the saw.  For best results…a.k.a. winning….you can only pull towards yourself.  You cannot push at the other person, otherwise the saw bends and stops the cutting action, losing time… AND the race.  It takes focus and balance to be good at this skill, AND plenty of restraint to avoid ‘helping’ your teammate get their side of the blade through.  Forcing the saw to do its work, or anxiously pulling before your partner has time to complete their pull, also creates snags and stoppage in action. You have a job, and your teammate has a job, and neither can do what the other must.  Mum and I put our observations to the test, easily making it out of the first rounds, simply by working together.  As the competitors got better, we had to focus on each other and even co-ordinate our breathing, so we could be synchronized in a relaxed, yet intense, motion.  If a trophy was not sitting in my hand, I would be tempted to say: This memory is not accurate. This did not actually take place.  I mean, how could we have won?  We did not practice or know anything about sawing, nor had we ever worked as a team before.

This is a parallel to what it is like being part of a family.  We do not get a practice family or know anything about how to be a good one, before we are plunked into the midst of strangers, and the race, to find out how this family thing works, is on.  The same sawing action process that helped mum and I to work together toward a common goal, is what I will look for in clues to being positive with US.   I will focus on what is my job, letting others do their job, and try my very, very best, not to push at the other person, only pulling when it is my turn.  I am thinking there will be a continuation of the happy/healthy/hopeful themes that have been running through Week 5 & 6, so will be looking for that connection as well.

Until then, if a random stranger presents you with a trophy for a positive action happening out in public, that might be me.  I am giving out trophies this week, for people who demonstrate positive living.  Trophies for everyone! 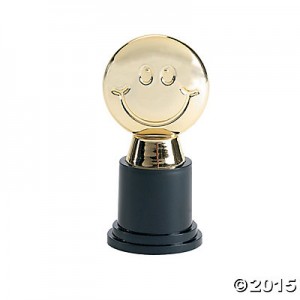 2 replies to “Week 7, Trophies for Everyone!”